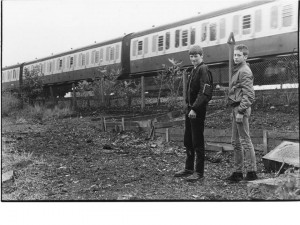 Gary Layton (left) and a friend clearing land by railway

I must have spent maybe around 5 years or so as a regular there. I was part of the close knit group of around 15 or so regulars that went there. When I say regular it would have been several evenings a week there and often a whole day at the weekend. It was like a youth club for our group!

We often would just sit around for hours as a group in the hay shed that was one of the first sheds on the left alongside the stables. We would spend part of the evenings mucking out the stables and just generally helping out. It didn’t really feel like work.

The reward would be the extra horse riding that we had within the indoor arena. The horse riding didn’t stay within the grounds though. I went several times via the roads on horseback on a Sunday where we rode on Hampstead heath on the area behind the Spaniards inn. There doesn’t seem to be any record of when we set off real early on a Sunday morning once via road all the way to Hyde park and rode around the sand track at Rotten row and then back to the farm. That was a real long day. On each occasion we would take maybe 8 or 9 ponies.

Don’t remember most of the ponies names. One was named Tio Pepe. one the largest there. chestnut in colour and around 14 hands high. funny some of the things you remember. Another was a small grey pony called Whiskey. Got a good kick off him once!

There’s no mention on the site of us being on the biggest kids TV show of the time “Magpie”. A bunch of us got permission for a day out of school for filming along with Mick Robertson who was the main presenter of the show. I was in several parts of the show when it aired on TV as I got to carry the battery pack and mike and so had to be in a lot of the filming. We felt like big TV stars that day!!! I think it was around 1974?

Some of the names I remember from back then was Angie Emerson(there’s a pic of her on the site): she was part of our group. Sisters Julie & Michaela though I forget their surname. Others are Mark Hearn. brothers Martin & Michael Coleman.

Obviously Eileen who ran the stables along with her husband Alan. I did a small amount of building work with Alan a few years later. They lived in Prince of Wales Rd. One of the other women that worked there was Ellie. Another was John Caulfield. He worked for Inter-action. Talacre youth club was part of the same group(a lot of time spent there also).

I know a lot these things are viewed through rose tinted specs later in life but this really was a great time for me for several years and I thank you.